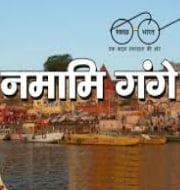 The National Mission for Clean Ganga (NMCG) has approved ten projects in Uttar Pradesh, Bihar and West Bengal to the tune of about Rs. 2,033 crore.
These projects were approved in the 5th meeting of the Executive Committee of NMCG. Eight of the ten projects pertain to sewage infrastructure and treatment, one each to ghat development and Ganga Knowledge Centre.

In Bihar, three major sewage infrastructure projects were approved in Barh, Kankarbagh and Digha. These projects will create additional sewage treatment capacity in Kankarbagh and Barh.
In West Bengal, three projects were approved. Out of these two pertain to sewage infrastructure while the third one is for ghat development.  In Uttar Pradesh, sewage infrastructure work in Chunar, district Mirzapur, has also been approved at an estimated cost of around 28 crore rupees.
Project to establish Ganga Monitoring Centres (GMCs) was also approved in five riparian Ganga states. The objective of GMCs is to establish efficient monitoring of wholesomeness of river including flow levels, pollution levels, point and non-point sources of pollution, among other parameters. Two pilot demonstrative projects of treatment of drains using bioremediation method were also approved.

NMCG is the implementation wing of National Council for Rejuvenation, Protection and Management of River Ganga (referred as National Ganga Council). It was established in 2011 as a registered society under Societies Registration Act, 1860.
It has a two tier management structure and comprises of Governing Council and Executive Committee. Both of them are headed by Director General (DG), NMCG. Executive Committee is authorized to approve projects under mission up to Rs.1000 crore.
Similar to structure at national level, State Programme Management Groups (SPMGs) acts as implementing arm of State Ganga Committees. This structure attempts to bring all stakeholders on one platform to take a holistic approach towards the task of Ganga cleaning and rejuvenation.