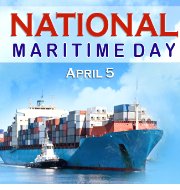 The National Maritime Day is celebrated every year to support global economy through sea transport. It also supports safe and sound environmentally responsive way of transporting goods from one part of the world to the other. The theme of National Maritime Day, 2021 is as follows:
Theme: ‘Sustainable Shipping beyond COVID-19’ on the lines of ‘Aatma Nirbhar Bharat’ initiative

Indian shipping began on April 5, 1919. This is why India celebrates National Maritime Day on April 5 every year. The first ship of India The SS Loyalty sailed from Mumbai to United Kingdom. It was manufactured by the Scindia Steam Navigation Company Limited. This is highly historic as the sea routes were completely under the British control in those days.

Maritime Day in other countries

The other countries that celebrate Maritime Day are China, Mexico, Pakistan, United States.

Theme: Seafarers at the core of Shipping’s future

India has 43 shipping companies that own more than 1,400 ships. They have a capacity of 12.69 million tonnes. Shipping is the most efficient and cost-effective method of transportation of goods. Therefore, India focuses on maritime security, maritime infrastructure, maritime education and development of maritime standards in its policies.

The organisation is responsible for maritime protection and preventing pollution from ships. India became the member of IMO in 1959.