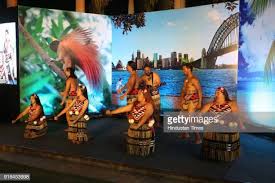 International Solar Alliance and Pollinate Energy based in India, Nepal, and Australia and solar lanterns from Barefoot College in Rajasthan were also showcased at event.

Cuisine: Among the cuisine showcased at the event, a curated menu included Fiji’s national drink ‘Kava’ and dishes slow-cooked in an earth oven using heated rocks in a pit oven specially dug for purpose at New Zealand High Commission.

Traditional masks and artefacts from Papua New Guinea as well as Pacific Green furniture and other products from Fiji were also displayed.

Artist: A multi-award-winning R&B and soul artist from New Zealand named Aaradhna, performed with her band. She is part Indian and part Samoan and has to her credit four individual albums.

Cultural events hold importance as they encourage people to people links between India and countries in Pacific region which receive a boost through an event like Namaste Pacific.

Why India? India being highly respected among pacific country and as it is becoming an important country in Pacific region, it is appropriate to celebrate Pacific culture in India. Such event is an example of things that unite the countries of Indo-Pacific.