Melting of glaciers in Sikkim 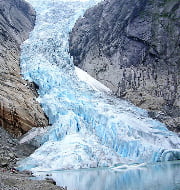 Scientists in Dehradun recently highlighted that the glaciers in Sikkim are melting at a faster rate than in rest of Himalayas.

The scientists at Wadia Institute of Himalayan Geology (WIHG), Dehradun studied 23 glaciers in Sikkim. They studied the effect of climate change on these glaciers during the period of 1991 to 2015. It was observed that the smaller glaciers are retreating while the larger ones are thinning.

The response of the glaciers to the climate change depended upon several factors like:

Small glaciers which have an area of less than 3 square kilometres responded to the warming by a process called deglaciation. It is the process by which the glacier retreats resulting in the exposure of the underlying earth’s surface.

The study observed that the larger glaciers responded to climate change with a process called downwasting. It is the process by which the glaciers thin out due to melting of the ice. It occurred in glaciers that have an area of more than 10 square kilometres.