Malabar 2018: India, Japan and US start naval exercise off coast of Guam Island in western Pacific 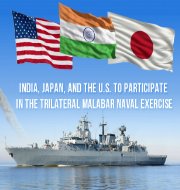 Trilateral Naval Exercise Malabar 2018 between India, Japan and United States kicked off the coast of Guam in Philippine Sea. It will be 22nd edition of the naval exercise, which has now become an annual feature in deep military ties between India and US. It will be first naval wargame after US renamed its Hawaii-based Pacific command (PACOM) as Indo-Pacific Command (INDOPACOM) amid increased Chinese activities of building artificial islands in South China Sea and sending submarines into Indian Ocean.

The Malabar exercise was started in 1992 as joint Indo-US naval drill. Since then it is held annually.But it was suspended from 1998 to 2002 after India conducted nuclear weapons tests in 1998. Japan became permanent participant in 2015.
The primary aim of this multilateral exercise is to increase interoperability amongst navies of three countries and develop common understanding of procedures for Maritime Security Operations and deepen defence relations between them.
In 2007, the exercise also saw participation of Australia and Singapore. All the participating nations in the exercise have clarified earlier that Malabar series of exercise is not aimed against specific country Since last two years, Australia repeatedly requested to be part of annual exercise but India again refused after China raised is concerns.