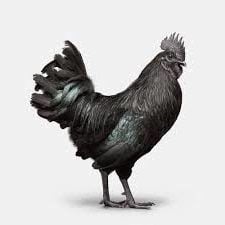 Kadaknath chicken breed is unique for its black colour due to its black-feathers. Its black colour stems from the deposition of melanin pigment. This breed of chicken is popular for its adaptability and flavourful good-tasting black meat, which is believed to have medicinal properties. It is native tribal districts of Jhabua, Alirajpur and parts of Dhar in Madhya Pradesh.
Kadaknath chicken contains 25-27% of protein in comparison with other breeds of chickens that contain 18% protein. It is also known for its high iron content. It has fat and cholesterol content lower compared with other chicken breeds. Due to this special characteristics, Kadaknath chicken’s chicks and eggs are sold at much higher rate than other varieties of chicken. This chicken breed is very popular among local tribal people mainly due to its adaptability to the local environment, disease resistance, meat quality, texture and flavour.

Recently, Kadaknath chicken had virtually became bone of contention between Madhya Pradesh and Chhattisgarh with both the States staking claim over its nativity for GI tag. Both States had filed applications with the Geographical Indication Registry office in Chennai for the ‘GI tag’ for this black-winged chicken variety.

The GI tag is name or sign used on certain products which correspond to specific geographical location or origin. It is used for agricultural, natural and manufactured goods having special quality and established reputation.
These goods and products having tag are recognised for their origin, quality and reputation and gives it required edge in the global market. It also ensures that none can use their name, giving them exclusivity. The registration of a GI is valid for 10 years after which it needs to be renewed.
GI is covered as element of intellectual property rights (IPRs) under Paris Convention for Protection of Industrial Property. At international level, GI is governed by WTO’s Agreement on Trade-Related Aspects of Intellectual Property Rights (TRIPS). In India, GI tag is governed by Geographical Indications of Goods (Registration and Protection Act), 1999. This Act is administered by Controller General of Patents, Designs and Trade Marks, who is also Registrar of Geographical Indications.