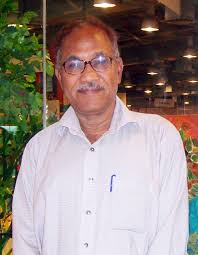 Eminent Konkani writer Mahabaleshwar Sail (74) was bestowed with prestigious Saraswati Samman 2016. He was awarded for his novel “Hawthan (हावटण)” that captures cultural lives of traditional potter community in Goa.
He was presented the award, comprising plaque and a cash purse of Rs.15 lakh by Union minister for commerce and industry Nirmala Sitharaman at event held in New Delhi.

Mahabaleshwar Sail is bilingual writer based in Goa. He has written four Marathi dramas and seven Konkani novels. He has also written five short stories and novel in Marathi. He is best known for his work ‘Paltadcho Munis’, which had inspired film by same name. Most of his short stories and novels are translated into English and Hindi. His work ‘Hawtham’ was published in 2009. He has received Sahitya Akadami Award in Konkani language for his short story collection ‘Taranga’ in 1993.
Mahabaleshwar Sail was born on 4 August 1943 in Shejebag in Uttara Kannada district of Karnataka. He had served in Indian Army and had participated in 1965 Indo-Pakistani War. He also had served as UN peacekeeper in 1964-1965 at Israel and Egypt border. He also had worked as supervisor in Forest Department, Goa, Daman and Diu Police and India Post till his retirement.

Saraswati Samman is an annual award bestowed upon Indian citizen for his outstanding literary work written in any 22 Indian language mentioned in Schedule VIII of Constitution and published during last 10 years. The award has been named after Indian goddess of learning Saraswati.
It is considered one of the highest literary awards in India. It was established in 1991 by the KK Birla Foundation. It carries cash prize of 15 lakh rupees, a citation and a plaque of goddess Saraswati. Harivansh Rai Bachchan was first recipient of this award for his autobiography published in four volumes.