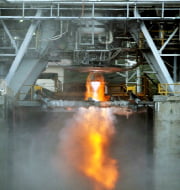 The Indian Space Research Organisation (ISRO) has successfully conducted hotbed test of the indigenously developed high-thrust cryogenic engine (CE20) of the GSLV Mark 3 (LVM3) rocket for the upper stage.
The long-duration test was conducted at ISRO Propulsion Research Centre at Mahendragiri, Tamil Nadu and lasted for 640 seconds. It  was conducted with Mixture Ratio Controller (MRC) in a closed loop mode.
Key facts

Earlier Tests
CE20 engine already has undergone two short-duration tests for engine ignition and steady state performance. In 2015, the first developmental engine completed different hot tests in various operating regimes. In the next the engine will be vacuum tested in the high altitude test facility as part of the flight acceptance test.
Comment
This test is considered as phenomenal achievement in the shortest time. It will boost India’s capability to launch heavier satellites into higher orbits and is capable of doubling the capacity of payloads that can be carried into space.
GSLV Mark 3 rocket is the biggest rocket made in India and capable of launching four-tonne satellites into geosynchronous orbit. India is sixth spacefarer after US, Russia, the European Space Agency (ESA), China and Japan to develop a cryogenic engine.