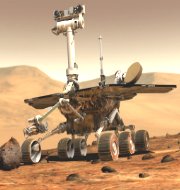 NASA will send first-ever mission named as InSight (Interior Exploration using Seismic Investigations, Geodesy and Heat Transport) dedicated to exploring the deep interior of Mars.
InSight will be stationary lander that will be launched in May 2018. It will be first NASA mission since the Apollo moon landings to place seismometer, a device that measures quakes on the soil of another planet.

InSight is NASA’s Discovery Program mission that aims to place stationary lander equipped with seismometer and heat transfer probe on surface of Mars to study red planet’s early geological evolution. It is terrestrial planet explorer that will address one of most fundamental issues of planetary and solar system science. It will help in understanding processes that shaped rocky planets of inner solar system (including Earth) more than four billion years ago. The robotic lander will perform a radio science experiment to study internal structure of Mars by deploying seismometer and a burrowing heat probe. It will measure Mar’s vital signs such as pulse (seismology), temperature (heat flow probe) and reflexes (precision tracking). It will let scientists understand how different its crust, mantle and core are from Earth.