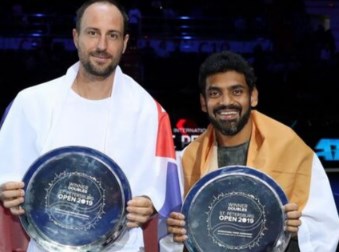 Divij Sharan of India and partner Igor Zelenay of Slovakia, clinched Men’s Doubles Title at ATP Tour Tennis Tournament held in St. Petersburg in Russia. In the final, the duo defeated Italian pair of Matteo Berrettini and Simone Bolelli (with 6-3, 3-6, 10-8).

It was the 3rd title of season for Divij, who had won US $125,000 Ningbo Challenger a fortnight ago with Australia’s Matthew Ebden. The 49th-ranked Divij has so far won 16 Challenger and 19 Futures doubles titles, apart from 5 Tour titles.

It was also the 5th Tour doubles title for 33-year-old Divij Sharan, who had started the season brightly by winning Maharashtra Open ATP title in Pune, Maharshtra with Rohan Bopanna.

Divij and Bopanna, who had won Asian Games gold in 2018 in Palembang, had tried to compete together in professional circuit in 1st quarter of season, but opted to partner others later in an attempt to get into bigger events. The duo Divij and Bopanna had beaten Italian pair of Berrettini and Bolelli for the only success in Davis Cup tie against Italians on grass in Kolkata earlier in the season.