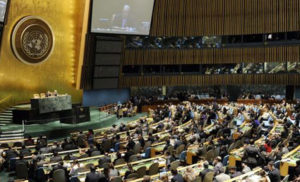 India has abstained from voting on United Nation General Assembly (UNGA’s) resolution aimed at examining options to end trade in goods which are used for capital punishment and torture. India stated that it is unacceptable to place death penalty on par with torture that it firmly believe that freedom from torture is a human right which must be respected and protected under all circumstances.

UN General Assembly adopted resolution on- Towards torture-free trade: examining the feasibility, scope and parameters for possible common international standards. The resolution was adopted by 193 member assembly with a recorded vote of 81 in favour, 20 against, and 44 abstentions.

India argued that incorporating capital punishment into scope of this resolution raised concerns about making an attempt to place it on par with torture.

India stressed that the country remains firmly committed to prevent torture and other such punishment (like cruel, inhuman and degrading treatment).

India stated that where capital punishment is statutorily provided for, due process of law is followed.

It warned the assembly against current resolution, that it may even start a duplicative parallel process related to goods being used for torture and capital punishment and that it will further create ambiguity by conflating different issues.

In India, capital punishment is a statutory provision, but at the same time it is used in rarest of rare cases. Also, acts of torture are punishable in India under various provisions of the Indian Penal Code (IPC) and Indian judiciary system serves as a bulwark against any such violations of human rights.