Himgiri of Project 17A 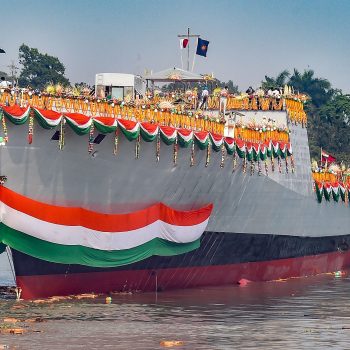 The Garden Reach Shipbuilders and Engineers (GRSE) recently launched a new Project 17A ship called Himgiri for the Indian Navy. The ship was launched into the waters of Hooghly river. It is a Nilgiri-class Stealth Frigate.

The project was approved by the Government of India in 2015. Under the project, a total of seven advanced frigates are to be delivered to the Indian Navy. Four of these are to be constructed by the Mazagon Dock Shipbuilders Limited and three are to be launched by GRSE. The cost of the project was estimated as 7 billion USD. The project led to creation of employment opportunities for more than 2,000 Indian companies and MSMEs.

The Project 17A ships are guided missile frigates. Each of these ships are 149 metres long. They have displacement of approximately 6,670 tonnes and a speed of twenty-eight knots. The ships being built under the project uses the latest integrated construction methodology. They have reduced build periods and enhanced pre-outfitting to augment quality. The ships are built using indigenously developed steel. They are integrated with indigenous sonar system and weapons such as BrahMos missile, LRSAM.

It is the first of the three ships built by GRSE. The Project 17A ships are fitted with advanced sensors, indigenous weapons and is equipped with gas turbine propulsion. Earlier Himgiri was commissioned into the Indian Navy in 1974 and decommissioned in 2005. A new ship is now being launched in 2020.

In 1976, Himgiri was the first ship of Indian Navy to shoot a pilotless aircraft.

They are the updated class of Leander class. Frigate is a type of warship that has different roles over time. Also, frigates are of various sizes. The Nigiri class Frigates of Indian Navy are Himgiri, Dunagiri, Udaygiri, Vindhyagiri and Taragiri. The ships have been named after the hills in India.