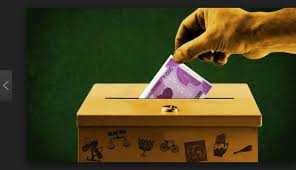 The Union Government is finalising electoral bonds scheme in order to bring greater transparency in funding of political parties. The scheme was announced in 2017-18 Union Budget as part of certain electoral funding reforms. It will make India first country in the world to have such unique bonds for  electoral funding.

Need for such Scheme

Under the scheme, proposed electoral bonds will resemble promissory note and not an interest-paying debt instrument. These bonds will only be issued by notified authorised bank and can only be bought using cheques or digital payments. These bonds purchased by donor will be given to political party for fixed period of time.
The electoral bonds will not carry name of donor and routing of money through banks will ensure that only tax paid money comes into political system. To avail benefit of this scheme, it is mandatory for all political parties to notify their bank account to the Election Commission of India. Political party using their notified bank account can convert these donated electoral bonds into money.