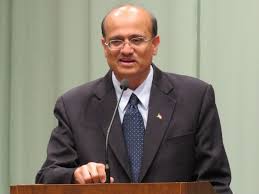 The Appointments Committee of the Cabinet (ACC) chaired by Prime Minister Narendra Modi has appointed senior diplomat Vijay Keshav Gokhale (58) as Foreign Secretary, highest post for a diplomat in the Ministry of External Affairs (MEA).
He will have a two-year term and shall succeed S Jaishankar, who completes his extended tenure in January 2018. Jaishankar was appointed foreign secretary in January 2015, for two years, just a few days before his retirement. Foreign Secretary is the

He is 1981-batch officer of Indian Foreign Service (IFS). He is considered an expert on China and is proficient in the use of Mandarin. Currently he is secretary (Economic Relations) in the Ministry of External Affairs. Earlier he was India’s Ambassador to China from January 2016 to October 2017.
He has also served as India’s top envoy to Germany between October 2013 and January 2016. He has worked in Indian missions in Hong Kong, Hanoi, Beijing and in New York.
He also has held the posts of director (China and East Asia) and then joint secretary (East Asia) in the MEA which covers India’s ties with China, Japan, Mongolia, Taiwan, North Korea and South Korea.
He had played key role in 2017 India-China negotiations to resolve the 73-day standoff between Indian Army and Chinese Army (PLA) at Doklam Plateau, a tri-junction between Sino-India and Bhutanese border near Sikkim.