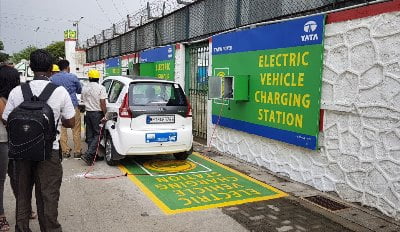 The “Go Electric” campaign was launched by Bureau of Energy Efficiency (BEE) in coordination with the Andhra Pradesh State Energy Conservation Mission.

The Andhra Pradesh State Government is to set up 400 Electric Vehicle charging vehicles all over the state to promote the usage of electric vehicles. This is to be achieved in coordination with the “Go Electric” campaign of BEE.

The main of the step is to attract investment in the EV sector by setting up charging stations and electric vehicle infrastructure.

By the rule of Government of India, every 3 km of roadways in cities should have a charging infrastructure. In national highways, a charging station should be established for every 25 km.

It is a statutory body working under Ministry of Power. It assists in developing strategies to reduce energy intensity of Indian Economy. BEE is the nodal agency to promote Electric Vehicle Charging stations.

The NREDCAP signed MoU with the Energy Efficiency Services Limited (EESL) to deploy electric cars. More than 300 electric cars have so far been deployed at various government organizations. Also, NREDCAP has signed agreements with Rajasthan Electronic and Instruments Limited (RIEL) and NTPC (National Thermal Power Corporation) for charging infrastructure. Under the FAME II scheme, around 460 chargers are to be installed in 83 locations across Andhra Pradesh.