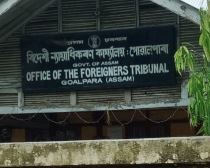 The 200 new Foreigners Tribunals are expected to be functional from October 1 as the government has cleared the decks by appointing  221 practising lawyers and retired civil servants and judicial officers as members of the tribunals.

Why the move has assumed significance?

Assam had 100 such tribunals. The backlog of over two lakh cases and the exclusion of over 40 lakh people from the complete draft of the National Register of Citizens (NRC) had forced the government to decide on setting up the 200 more tribunals in Assam.

Those 19 Lakh rejected cases under the NRC exercise will now have an opportunity to contest their cases before the tribunal.

How the Foreigner Tribunal Works?

The 1964 order which laid down the rules for the constitution of foreigner’s tribunal empowers the central government to refer the question as to whether a person is not a foreigner within the meaning of the Foreigners Act, 1946 to a Tribunal to be constituted for the purpose, for its opinion.

Until recently the Foreigner’s tribunals were unique to Assam. In other parts of the country, the local police used to apprehend the foreigner if staying illegally and used to produce them before the court under the Passport Act, 1920, or the Foreigners Act, 1946, with the punishment ranging three months to eight years in jail.

The new Foreigners (Tribunals) Amendment Order 2019 issued by the Ministry of Home Affairs allows all states to constitute their own FTs, earlier unique to Assam, to address the question of citizenship of a person. The amendment empowers district magistrates in all states and union territories to set up FTs to detect foreigners.