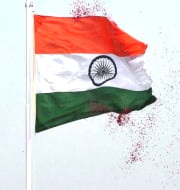 Delimitation is the process of fixing boundaries of constituency. The Delimitation had been suspended between 1976 and 2001. This was because GoI was implementing the policy of family planning in a full-fledged way during this period.