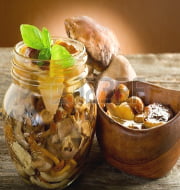 Anti-dumping duties: It is counter import measure under the multilateral World Trade Organisation (WTO) regime to protect domestic producers and market from below-cost/cheap imports. It varies from product to product and from country to country.