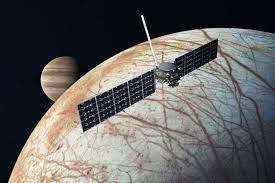 The Europa Clipper which is formerly known as the Europa Multiple Flyby Mission is an interplanetary mission being developed by NASA and also includes an orbiter. The spacecraft, which is scheduled to launch in October 2024, is being designed to study the moon Europa through a series of flybys while in Jupiter’s orbit.

Projects like Jupiter Icy Moons Orbiter and Europa Orbiter, in which a spacecraft would be put into orbit around Europa, were originally planned but the radiation from Jupiter’s magnetosphere in Europa orbit would be harmful to the spacecraft, thus, it was decided that it would be safer to send a spacecraft into an elliptical orbit around Jupiter and conduct 44 close flybys of the moon instead.

During a 21-day launch window in October 2024, this mission will be launched on a Falcon Heavy. Gravity assists from Mars will be received by this spacecraft in February 2025, in December 2026 from Earth before arriving at Europa in April 2030.

Objectives of this spacecraft

The objective of this mission is to explore Europa, aid in selecting a landing site for the future Europa Lander, and investigate its habitability. The focus of this investigation is to learn about the three basic requirements for life: liquid water, energy, and chemistry.

Basically, it will study the ocean and the ice shell and characterize nature and confirm the existence of water within or beneath the ice, as well as process the surface-ice-ocean exchange. The chemistry and distribution of key compounds along with the links to ocean composition will also be studied. The geological characteristics as well as surface feature formation, including sites of current or recent activity, will also be looked into.