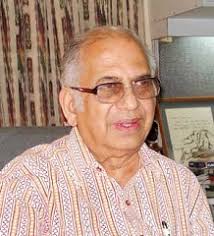 Veteran molecular biologist Pushpa Mittra Bhargava passed away in Hyderabad. He was 89. Bhargava was the founding director of Hyderabad based Centre for Cellular and Molecular Biology (CCMB)

Born in Ajmer on February 22, 1928. He had earned his Ph.D. in synthetic organic chemistry from Lucknow University. He had started his career with Central Laboratories for Scientific and Industrial Research.
His pioneering vision and efforts led to the founding of CCMB in 1977 as an institution for research in basic biology and for seeking its application for benefit of society. Under his leadership, CCMB had done pioneering research in cell, DNA and molecular biology with close industry linkages. He was strident critic of introduction of genetically modified crops in India.
He was actively engaged with issues in science and policy and served vice chairman of National Knowledge Commission constituted in 2005. He was chairman of the Drafting Committee for the Assisted Reproductive Technologies (Regulation) Bill 2013.  He was awarded Padma Bhushan in 1986.