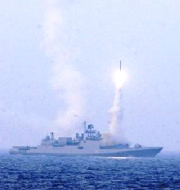 What is BrahMos Missile?

BrahMos is the fastest supersonic missile and the fastest anti-ship cruise missile in the world. It was developed by BrahMos Aerospace – a joint venture between DRDO and Russia’s NPO Mashinostroyeniya. The missile was named after Brahmaputra river in India and Moskva river in Russia. In 2016, since India entered into the Missile Technology Control Regime (MTCR), India and Russia decided to develop a new generation of Brahmos missiles with a range of 400 km and then increase it to 600 km. The extended range version has been tested from warships, including from INS Visakhapatnam.

Under the Project 15B, four stealth guided missile destroyers are being constructed at the cost of Rs. 29,643.74 crore. These destroyers are improved versions of Kolkata-class destroyers. These four vessels are named after major cities from all four corners of India. These are Visakhapatnam, Mormugao, Imphal and Surat. While INS Visakhapatnam was commissioned in 2021, the rest were launched into waters. They were designed by the Indian Navy’s Directorate of Naval Design and constructed by the Mazagon Dock Shipbuilders Limited in Mumbai. These vessels will be equipped with state-of-the-art weapons and sensors, including BrahMos and Barak-8 surface-to-air missiles.