China and Pakistan had signed more than 50 agreements in April 2015 on various fields including agriculture, education, power generation, infrastructure projects, telecommunication etc. Out of these, around 30 agreements are related to the Economic Corridor named China-Pakistan Economic Corridor (CPEC). In November 2015, this corridor has been kicked off. It would give China direct access to the waters of Indian Ocean and beyond. Prior to this, the two countries had released a so called “Karamay Declaration” in August 2015, which stressed their resolve to develop the economic corridors with joint cooperation for economic prosperity and better future. The declaration also mentioned the role of CPEC in the China’s ambitious ‘One Belt, One Road’ initiative.

What is China-Pakistan Economic Corridor (CPEC)? 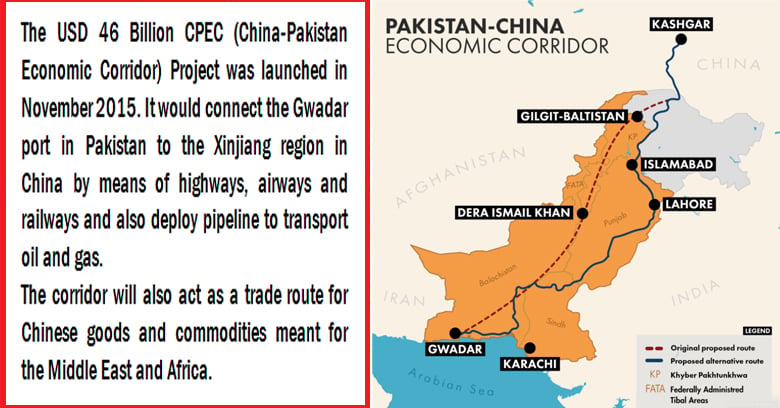 The CPEC is a 15-year project between Pakistan and China, which aims to connect the ancient Chinese trading town Kashgar with Pakistan’s deep-sea Gwadar port via PoK (Pakistan occupied Kashmir) through a network of highways, railways and oil and gas pipelines and fibre optic cables. The project runs about 3000 Km and the total construction cost of the project will be more than 46 billion dollars. The other component of the project is to develop special economic zones along the route, including power projects. The project was first proposed in 2013 and agreements to commence the work are signed in April 2015. The first phase projects will receive around 46 billion dollars in the form of concessionary and commercial loans, which are being arranged by the Silk Road Fund to the Chinese companies. The project is expected to complete in 2030. The CPEC includes 3 corridors. Presently work started in western corridor of the CPEC. The other two corridors – central and eastern – will be developed later.

For China, the Pakistan region has geo-strategic significance. Through OPEC, China would harness the potential of geographical location of Pakistan as a regional hub for China, Central Asia and Middle East.  Iran, Russia and United Kingdom have already showed interest to participate in the development of the project. The CPEC is part of China’s ambitious ‘One Belt, One Road’ initiative’. China views that stability in Pakistan is essential for success of its global ambition.

Presently the only maritime route available to China to access Africa, Middle East and Europe is via Malacca straits. The route is very long and there are chances of blockage of the route in the present tense situation in the South China Sea region. To overcome this, China is looking for alternative routes via Myanmar or Pakistan. Under the present strained relations with Myanmar, the CPEC project will offer an alternative shortest route to China to secure its oil imports. China can also use this route for its cheap exports.  Thus CPEC enhances China’s energy and economic security. The project will also support China to take its aggressive stand in South China Sea.

As USA is planning to end its military operations and leave the Afghanistan, China would like to fill the vacuum by promoting the CPEC project as a preventive measure to contain the terrorist elements. This will also help the China to contain the unrest in its Xinjiang province.

What benefits the CPEC offers to Pakistan?

Pakistan considers that CPEC has potential to change the Pakistan’s economic landscape. China’s investment in CPEC is its largest overseas investment and it is also the largest foreign investment in Pakistan. Pakistan is facing huge shortage of power and the proposed power projects along the economic corridor would solve the power deficit problem. Initially most of the project investment will be used to build power plants. The power projects will spur the industrial and agriculture activity. The improvement of transportation lines, fiber optics links and energy supply links will improve the overall economy of the Pakistan.

Pakistan has handed over the Gwadar port to China for upgradation. China will modernize Gwadar port by building a hospital, water supply projects and an international airport. Later, the interior areas of Pakistan will be connected to Gwadar port through road and railway lines. Pakistan hopes that the Gwadar port modernization will turn it into a regional trans-shipment hub by stabilizing its economy.

However, Baluchistan issue is concerning both Pakistan and China. Gwadar port is located in Balochistan and CPEC was launched only after 2,000 acres of land in restive Balochistan was acquired and given to China. Pakistan needed to set up a special force for protection of the Chinese workers and engineers working on the CPEC project. Domestically there are arguments in Pakistan about exact route of CPEC.

India’s main contention is about the corridor’s route through the PoK, which we consider as our territory and construction of CPEC would further strengthen the Pakistan’s claim over the region. There are several other concerns also. Firstly, China’s presence in the strategic location of PoK as a connecting point to South, West, Central and East Asia may limit the India’s outreach to the Eurasian region. Secondly,  Gwadar port further expands the China’s “String of Pearls”.

String of Pearls
String of Pearls refers to a network of ports which China is building from its eastern coast to the West Asia. China is investing in construction of ports, which in future can be converted into China’s naval bases. India is suspicious that China’s String of Pearls is aimed at encircling and containing India. Most of the Indian oil imports are transported through Strait of Hormuz. The Gwadar port of Pakistan is located near Strait of Hormuz. As part of CPEC project, China is developing the Gwadar port as a commercial port but in future it may be converted as a naval base. This would lead to maritime competition in the Indian Ocean and threatens India’s energy security.

Fourthly, India suspects that the CPEC is aimed at countering the India’s ‘Act East’ policy and growing India-USA relations. Lastly, there is also a fear that the newly developed roadways near Indian border in PoK region will increase the infiltration of anti-India elements from Pakistan to India.

India’s concerns about the project were raised during Prime Minister Narendra Modi’s visit to China in May 2015. In response China justified that CPEC is a commercial project and it is not aimed at countering India. China also mentioned that it is a ‘livelihood project’ in Pakistan. Because of its dilemma, India is yet to articulate its comprehensive approach towards the CPEC. The three policy options for India are:

If India looks it as a Chinese aggression in PoK region, it might adopt a strong policy against CPEC. As a second option, India also has an option to participate in the project while maintaining its position in PoK. This policy option may be suggested on several grounds. Firstly, there are economic opportunities which India might lose while China and Pakistan move ahead.  Secondly,  as China sees it, the CPEC project is a livelihood project and brings peace and stability in Pakistan. If Pakistan is peaceful and stable, it is in India’s interests only.  Thirdly, such a project makes implementation of Iran-Pakistan-India (IPI) gas project more possible.

The third option is to wait and let it happen while actively promoting our own “Spice Route” and “Mausam” projects.