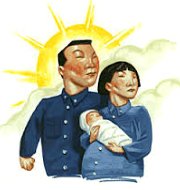 China, world most populous country has announced to abandon its three decades-long one-child policy and changed it two-child policy.
The ruling Communist Party of China (CPC) in this regard has issued an official communiqué at  the end of party’s 4 day plenary session headed by President Xi Jinping in Beijing.
The change of policy is intended to

This announcement comes amid slowdown of China’s economy which has plunged for the first time below the 7 per cent figure since the 2009 global economic crisis.
Background