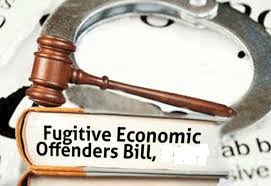 The Union Cabinet has approved introduction of Fugitive Economic Offenders Bill, 2018 in Parliament. The bill proposed by Finance Ministry aims to curb practice of evading criminal prosecution by economic offenders (wilful defaulters) who flee from country to evade clutches Indian law by remaining outside jurisdiction of Indian courts.

It defines fugitive economic offender (FEO) as any individual against whom warrant for arrest in relation to scheduled offence (enlisted in the this law) has been issued by any court in India, but he leaves or has left India to avoid criminal prosecution or  refuses to return to

India to face criminal prosecution.
The onus is on authorities to prove that an individual is a fugitive economic offender. It gives government right to confiscate property of such economic offenders in India and abroad. Its provisions are also be applicable on proxy-owned properties of economic offenders.
It is applicable in cases where total value involved in such economic offences is Rs.100 crore or more. It keeps banks and other financial institutions at Centre and provide help to them recover amount.
It establishes Special Court under the Prevention of Money-laundering Act (PMLA), 2002 to declare a person as FEO. The special court will also appoint ‘administrator’ to oversee confiscated property. It will be responsible for disposing of confiscated property and t property will be used to satisfy creditors’ claims.
It debars fugitive economic offender from defending any civil claim at the discretion of any court including High Court. If prior to the declaration, the alleged FEO returns to India and submits to the appropriate jurisdictional court, proceedings under this Act will cease by law.

There have been several instances of economic offenders (eg Vijay Mallya and Nirav Modi) fleeing country to evade clutches Indian law to remain outside jurisdiction of Indian courts. The absence of such offenders from Indian courts has several deleterious consequences. It hampers investigation in criminal cases, wastes precious time of courts of law, undermines rule of law in India.
Further, most such cases of economic offences involve non-repayment of bank loans thereby worsening financial health of banking sector. Moreover, existing non-coherent civil and criminal provisions in law are not entirely adequate to deal with severity of problem. This bill will provide effective, expeditious and constitutionally permissible deterrent legal teeth to enforcing agencies to ensure that such actions of FEO are curbed.