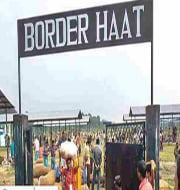 The second border haat (rural market) was opened for common people at Kamalasagar in Sipahijala district of Tripura bordering Brahmanbaria district of Bangladesh.
The haat was jointly inaugurated by Prime Minister Narendra Modi and his Bangladesh counterpart Sheikh Hasina by video-conferencing from Dhaka on June 6, 2015.
This market is set up at the zero line of the international border with one part on the Indian side and the other in Bangladesh. Initially it will facilitate bilateral trade of 16 shortlisted locally produced goods.
These goods include agricultural and horticultural crops, spices, minor forest products excluding timber, fish and dry fish, dairy and poultry products, cottage industry items, wooden furniture, handloom and handicraft items.
People residing within a distance of 5 km from along the border are entitled to do business at the haat which will take place once in a week initially.  No local taxes would be levied on the goods sold in the haats and currencies of both the countries would prevail.
It is anticipated that the haat will provide basic livelihood opportunities to more than thousands of marginal income families and small traders along this border areas of both the countries.
First border haat was inaugurated on Srinagar- Purba border area in January 2015 by Union Commerce and Industries Minister Nirmala along with her Bangladeshi counterpart Tofail ahmed.