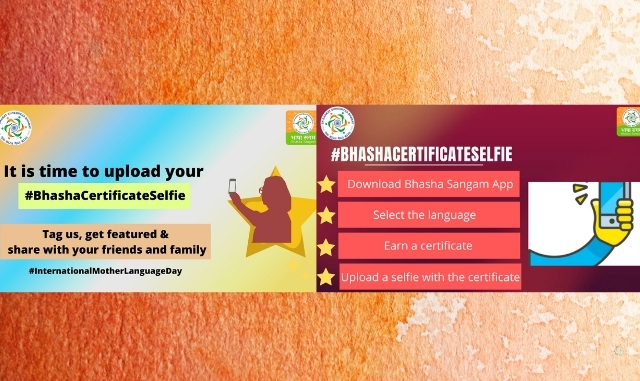 The Bhasha Certificate Selfie campaign has been launched by the Ministry of Education with the aim of promoting multilingualism and encouraging cultural diversity so as to foster the Ek Bharat Shreshtha Bharat spirit.

This initiative aims to promote the Bhasha Sangam mobile app which has been developed by MyGov India and the Ministry of Education. By using this app, 100+ sentences of daily use in around 22 scheduled Indian languages can be learned by people. This initiative aims to ensure that the people of the country acquire basic conversational skills in several Indian languages. 75 lakh people learning basic conversational skills have been set as a target to achieve the objective of this initiative.

The ‘Bhasha Certificate Selfie’ initiative encourages people to use the hashtag #BhashaCertificateSelfie while posting a selfie with their certificate on their social media accounts.

How to receive the certificate?

To receive a Ministry of Education-approved certificate, a user must first download the mobile app, which is accessible on both Android and iOS platforms. Then the user can choose any language from a list of 22 Indian languages, complete all levels, take a test, and receive the certificate.

The “Ek Bharat, Shreshtha Bharat” scheme was launched by PM Narendra Modi on 31 October 2015 with the aim of celebrating India’s cultural diversity while also establishing a strong mechanism for inculcating cultural awareness and nationalism among the citizens of India.