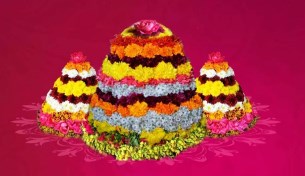 Bathukamma is being celebrated in Telangana from September 25 to October 3 this year.