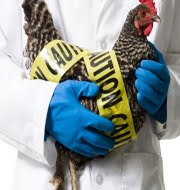 The Avian influenza disease was recently discovered at a poultry farm in Hyuga City of Japan. Around 40,000 chicken in every big farm are being slaughtered and buried. Also, the exports in and around 3 km radius around the infected farms have been restricted. In all around 1.8 million chicken have been culled so far since the outbreak began in September 2020.

The current outbreak that started in September 2020 is considered as the largest outbreak in Japan since 2016. In 2018, Japan faced an outbreak of bird flu and 91,000 chicken were then culled.

It is a highly contagious viral disease that affects birds such as Turkeys, chicken, Guinea fowl. They occasionally infect mammals including humans. The Avian influenza virus is classified into two types based on their surface proteins namely Hemagglutinin and Neuraminidase.

In September 2019, India was declared free from Avian influenza. The status will last only till next outbreak. Lastly India reported an outbreak of Avian influenza in 2017.

Among all the known influenza virus, H5N1 is considered to be highly deadly. It was the first Avian influenza virus to infect humans. The first infection of H5N1 occurred in 1997 in Hong Kong. H5N1 naturally occurs in waterfowl. The virus transmits to humans through contact with infected bird faeces, secretion from the mouth or eyes, nasal secretions, etc.

The strategy aims to control the spread of the virus and prevent the seasonal influenza. It was launched by the World Health Organisation. The following are the main features of the strategy

It was launched in 1952. It comprises of National Influenza Centres and WHO collaborating centres. The system mainly focuses on monitoring the outbreak of potentially pandemic viruses. It is the backbone of the Global alert system for influenza.