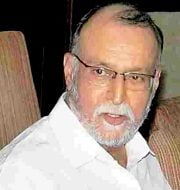 President Pranab Mukherjee has appointed former bureaucrat Anil Baijal (70) as the 21st Lieutenant Governor of Delhi.
He will succeed Najeeb Jung who had resigned before completion of his term and is returning to teaching profession.

According to Article 239AA President administer UT of NCT Delhi through Lt Governor. The 69th Constitutional Amendment Act, 1991 (amended article 239AA) which provided special status to UT of Delhi also designated administrator of Delhi as Lt Governor. He is appointment by President and holds office till pleasure of President. Lt Governor of Delhi is also empowered to promulgate ordinances during the recess of assembly.