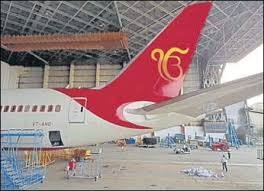 To commemorate the 550th birth anniversary of Guru Nanak Dev also known as Prakash Purb, the national carrier has put the symbol on its Boeing 787 Dreamliner aircraft which will fly on 31 October. Air India will fly its aircraft thrice a week on Mumbai-Amritsar-Stansted route on Monday, Thursday and Saturday.

The international flight is set to fly from Amritsar to Stansted in London, United Kingdom (UK) and will facilitate Sikh pilgrims visiting Punjab on the occasion.

The gesture is unique as the national carrier Air India has never depicted any religious symbol on its planes, although earlier in October 2019 a tribute to Mahatma Gandhi on his 150th birth anniversary, it had painted an image of Father of Nation on tail of one of its Airbus A320 aircraft flying on Delhi-Mumbai route.