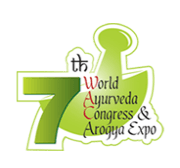 The 7th World Ayurveda Congress (WAC) was held from December 2 to 4, 2016 at Science City in Kolkata, West Bengal.
It was organised by the World Ayurveda Foundation with the support of the Union Ministry of AYUSH to facilitate development and growth of AYUSH system of medicine comprising Ayurveda, Yoga and Naturopathy, Unani, Siddha and Homoeopathy.

Besides, to facilitate development and growth of AYUSH system of medicine the AYUSH ministry also had organised AROGYA Expo. It was inaugurated by Union Minister for AYUSH Shripad Naik.