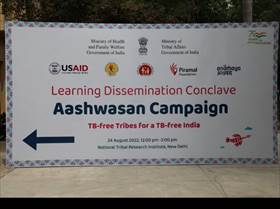 Recently 75 high burden tribal districts have been selected by the Ministry of Tribal Affairs and the Central TB Division of the Ministry of Health and Family Welfare to become TB free in the coming months.

For 75 such districts, a three-pronged strategy is presented, focusing on the following:

India is committed to eliminate tuberculosis from the country by 2025, five years ahead of the World Health Organization’s (WHO) global target i.e. 2030.