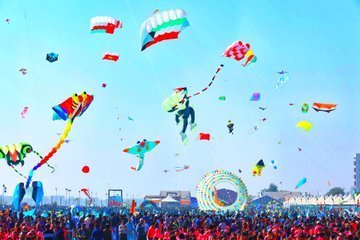 The 31st International Kite Festival, one of the most expected festivals that allures the crowd especially kite flyers from all over the world began on 7th January 2020 at Sabarmati Riverfront in Ahmedabad, Gujarat. The festival was inaugurated by Governor of Gujarat, Acharya Devvrat and Chief Minister of Gujarat Vijay Rupani amid the presence of country representatives in India and state ministers.

As far as the history of this festival is concerned, Ahmedabad has been hosting this International Kite Festival also known as Uttarayan since 1989, this grand event is a part of the celebrations for Makar Sankranti as well.

More than 140 kite flying experts from 40 countries have taken part in this event, other than this, about 800 kite fliers from Gujarat and 200 kite fliers from 12 other states are also participating in this unique festival. Due to successive International Kite Festivals in the state, the size of the kite industry has been expanded and this festival is being organized in nine other places across the state simultaneously including Statue of Unity at Kevadiya, Surat, and Vadodara.