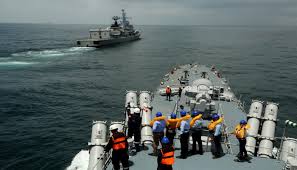 Naval leg culminated with a valedictory reception hosted by Flag Officer Commanding Western Fleet (FOCWF) for participants and organisers where understanding and bonhomie between teachers and students made it clear that naval leg was successful in its primary task. DCC now moves to Chandigarh for the phase with the Indian Air Force.

Over the first 3 days, during Indian Navy and Indian Coast Guard (ICG) phase of a week, which started on 26 August 2019, the DCC participants were apprised on organisation, roles and responsibility of Indian Navy, ICG and Naval Value System.

The 32 participants of course visited Naval Dockyard Mumbai and were also taken for Heritage Walk around dockyard. Course also visited frontline submarines and warships of Indian Navy and Coast Guard. A visit to the Joint Operations Centre (JOC) and a brief on the coastal security construct brought participants up to speed on nuances and workings of coastal defence mechanism.