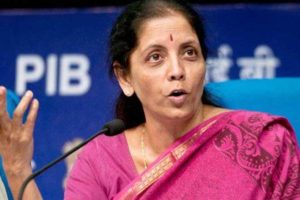 Nirmala Sitharaman, Union Minister of Finance and Minister of Corporate Affairs was named in 100 Most Influential in UK-India Relations: Celebrating Women list. Besides Sitharaman, list included Penny Mordaunt, Britain’s Secretary of State for Defence and Ruchi Ghanashyam, Indian High Commissioner to the UK.

The ‘100 Most Influential in UK-India Relations: Celebrating Women’ list was launched by Sajid Javid, UK Home Secretary to mark India Day in Houses of Parliament in London. This is the 3rd year of list.

The launch of list also marked commencing of UK-India Week in Britain. The course of week will include a series of sessions on trade and investment and closer cooperation between two nations.

The women mentioned in list holds influencing positions in India and UK across 11 broad sectors such as politics, technology and sustainability.

Nirmala Sitharaman: The list called her as one of India’s most powerful women and credited her for playing a pivotal role in bilateral relationship. Having studied at London School of Economics (LSE) and worked in UK she is familiar with UK more so than probably all her other colleagues.

The list is recognition of front and centre role played by women in bilateral relationship. It acknowledges that from business to politics, and art and literacy, women are continuing to make their way in bringing together this bold startegic partnership via collaboration and relationships.

It highlights huge potential for bilateral future (of UK and India) as they continue to forge on together as two great countries.