There are five sources of employment / unemployment statistics in India viz. NSSO, Economic Census, Employment Market Information Programme of DGET, Registrar General of India and Labour Bureau.  The NSSO (National Sample Survey Office) releases its survey-based employment results every five years. It includes both organised and unorganised sector employment. Central Statistics Office (CSO) releases the ‘Economic Census’ every five years, which also provides survey-based data on employment but only with respect to establishments in the organised and unorganised sectors. Labour Bureau, Ministry of Labour and Employment, releases the ‘Annual Survey of Industries (ASI)’, covering employment in the organised sector as well as the ‘Quarterly Report on Changes in Employment in Select Sectors’. While the NSSO, Economic Census and ASI offer state-level data, the quarterly publication releases sector-wise details.

The latest available data / trends on unemployment in India is from Employment & Unemployment Survey (2011-12) conducted by Labour Ministry and Economic surveys of last few years. According former report, all-India unemployment rate is 3.8 percent. This figure is in contrast with ILO (International Labour Organisation) data of 2011 which said that India’s 6% population is unemployed. Out of this 3.8, male unemployment stands at 2.9% while female stands at 6.9%.  Highest unemployment rate is in Goa (17.9%) followed by 14.1% in Tripura, 12.6% in Sikkim, 9.9% in Kerala, 8.3% in Bihar and 7.8% in West Bengal.

At All India level the Labour Force Participation Rate (LFPR) based on usual principal status approach is estimated at 529 persons out of 1000 persons. The male and female LFPR is estimated to be 774 and 254 persons respectively per

The WPR at All India level based on usual principal status is estimated at 508 persons out of 1000 persons; which signifies that about 51 per cent of the population of age 15 years & above is employed.

Several factors account for the variation in the degree of Unemployment in different states. Normally, Unemployment is high in areas having the following characteristics:

Regarding unemployment in India, we need to note that since poor cannot afford to remain unemployed, unemployment rate among the poor is very low as compared to educated youth who are from the relatively better of economic family background. Higher the level of education attainment, higher is the rate of unemployment in India. This is partly because of the fact that they can afford to remain unemployed to search for better employment opportunities. This is also a reason that there is increase in proportion of “Non workers” among Youth since 2001. Further, in recent years, the proportion of Non-workers has also increased among rural youth.

Employment in Organised and Unorganised Sectors

Employment may broadly be classified as:

There has been a slowdown in the growth of employment. For the last 14-15 years, the approximate growth rate in employment has been ranging between 3.0 to 3.3 percent annually.

Need of Investment growth for creation of Jobs

Defining challenge in India today is that of generating employment and growth. Jobs are created by firms when firms invest and grow. Hence it is important to create environment conducive for firms to invest.

Reforms are needed on three fronts

The Economic Development must bring some notable changes in the structural, institutional and technical set up. For example a shift from the dominance of primary sector to that of the secondary and tertiary sector is one of the important structural changes. Then, the change from labour intensive to capital intensive technology is a technological change. The shift in the ownership of land from the absentee landlords to actual tillers is institutional change.

This is evident from the data presented in the economic survey 2013 that growth of India’s service sector is second fastest in the world only after china. In the services sector, the survey noted that largest growth of employment was registered by “Construction” sector, registering an increase of nearly 2.5 crore between 2004-05 and 2011-12.

It is an irony that a few years back, when India was on high growth trajectory, its growth was jobless growth.  Jobless growth means that the high growth in GDP did not accompany a similar growth in employment, resulting in a low Employment Elasticity. 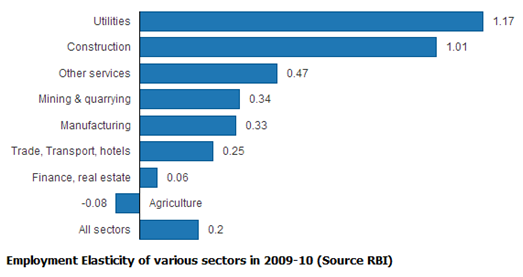 In recent years, the highest employment elasticity has been shown by the Construction and utilities sector (which includes energy, water and waste management). These are the biggest job generators in our country. Further, the graphics above shows that farm sector in India has shown negative employment elasticity. This simply indicates that growth in farm sector is accompanied by reduction in farm employment as more and more people leave this sector and go out for jobs in non-farm sector.

This indicates a daunting task for the government. On the one hand, it has to revive growth; on other hand, it has to provide new and better-paying jobs for a growing workforce.

In recent years there has also been a decline in the labour force and workforce participation rates of women. A large number of analysts have ascribed this to a rapid increase in female participation in education, both in the rural and urban areas.

We note here that very low and stagnating female labor force participation rates in urban India over the past 25 years. This stagnation is surprising given that it took place at a time of high GDP and earnings growth, a sizable fertility decline, a rapid expansion of female education, and rising returns to education. A combination of demand and supply side effects have played a role in accounting for this stagnation. On the supply side rising male incomes and education have reduced female labor force participation. Second, as the survey noted, there is a rapid increase in female participation in education, both in the rural and urban areas. This in part is driven by the preferences of educated women for white-collar service employment and stigmas attached with working in other  sectors.

Causes of  Unemployment in India

Problem of unemployment in India is not very grave in comparison to countries like Spain, Greece etc. However, the problems is of Under-employment, whereby people do the jobs worth less than their capacity to do. The growth of Indian Economy has been jobless. Since 1990’s, Indian economic growth is mainly based on manufacturing and services sector. The use of efficient technology in these sectors resulted in low level of employment opportunities creation. The low level of economic growth in primary sector curtailed the job opportunities at rural level. Thus it resulted in jobless growth. Further, rapid population growth adds more labour force to the market. More population means more consumption and less saving, less saving implies less capital formation and less production which finally leads to less employment. Some other reasons are as follows: