Every five years, an agricultural census is conducted in India. First such census was done in 1970s and the reference year for the first Agriculture Census was 1970-71.  Under this scheme, centre provides funds to states and entire work is done by the states only.

The agricultural census is done in phases. Primary and Secondary data is collected on structure of operational holdings by different size classes and social groups. Operational Holding refers to all land which is used wholly or partly for agricultural production and is operated as one technical unit by one person alone or with others without regard to the title, legal form, size or location.

Three Categories of states on Land Use statistics

For the purpose of land use statistics; India has been divided broadly into three categories.

Types of Landholdings in India

An operational land holding is a techno-economic land unit used wholly or partly for agricultural production and operated (directed/managed) by one person alone or with the assistance of others, without regard to title, size or location. A operation land holding may be consisted of either one or more than one parcels of land, provided they form the part of same unit.  Operational Land Holdings include only those units which are used either in farm production or farm production + livestock and poultry products (primary) and/or pisciculture or for only livestock and poultry products (primary) and/or pisciculture.

There are five kinds of Land Holdings in India, depending on various sizes as follows: 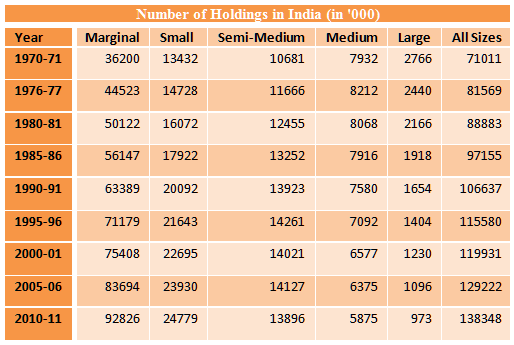 Highlights from the latest agricultural Census

The below observations have been sourced from Agricultural Census 2010-11.