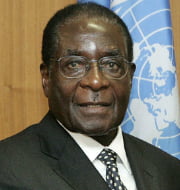 Zimbabwe’s President Robert Mugabe has been appointed as Chairman of African Union (AU).
He will be 13th Chairman of African Union (AU) and succeed Mauritanian President Mohamed Ould Abdel Aziz for a one-year term. The position of chairman of the AU is a rotating one on yearly basis and largely ceremonial.
Robert Mugabe: He has ruled Zimbabwe since independence. He is Zimbabwe’s longest serving President and had assumed office in December 1987. Currently, he is also chairman of the 15-nation Southern African Development Community.