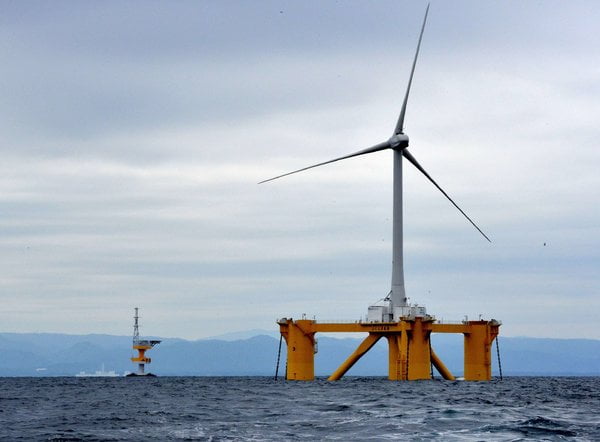 The world’s first full—scale floating wind farm is being built off the coast of Scotland in the North Sea. The wind farm, known as Hywind is a trial project which aims to bring power to 20,000 homes.
The floating wind farm technology will allow wind power to be harvested in waters that are too deep for the existing bottom—standing turbines particularly installed in shallow waters.

Unlike normal turbines, floating turbines are not attached to the seabed by foundations. Rather, they are attached by long mooring tethers, allowing them to be placed in deep water. Traditional fixed turbines work best at a depth of 20-50m on stationary base.

The park will be around four square kilometers in size in deep sea. Each turbine in the park will be floating at a depth of between 95 and 120 metres.  Each turbine tower, including the blades in the floating wind park is 175m high and weighs 11,500 tonnes. It uses a large buoy filled with iron ore to weight the base to keep it upright. The turbines also make use of new blade technology, which twits the blades in order to lessen the impact of wind, waves and currents to hold turbine tower upright.

The turbines in the floating wind farm can operate in water up to a kilometre deep. The power output is also larger than power generation from current stationary turbines. This revolutionary tech development project will demonstrate workability of floating wind farm technology in open sea conditions and also help to bring costs down.