Vijay Rupani sworn in as Chief Minister of Gujarat 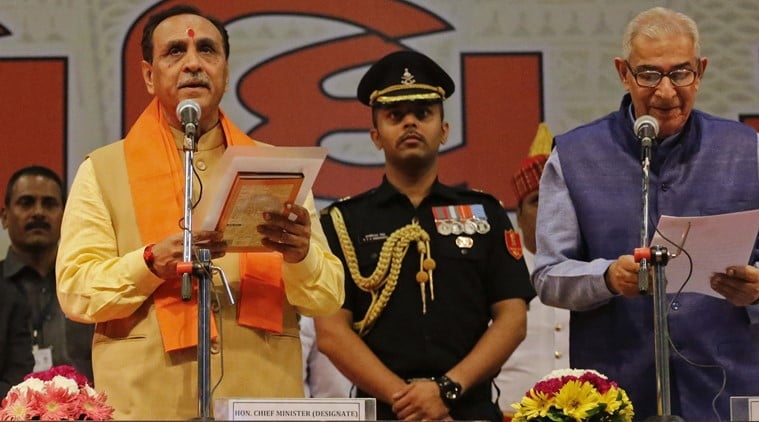 He was born on August 2, 1956 in Rangoon (now in Myanmar). He has been an active worker of the Rashtriya Swayamsevak Sangh (RSS) and the BJP since its inception. He had made his political debut as Rajkot Mayor in 1987.  He grew up in Rajkot and pursued BA and later LLB. He went to jail during the 1975 National Emergency.
He was inducted as minister in first cabinet expansion by Chief Minister Anandiben Patel in November 2014. He had held portfolios of Ministry of transport, water supply, labour and employment in Anandiben Patel Government. He was appointed as Chief Minister in August 2016 after Anandiben Patel was removed from the post. Earlier, he had served as MP of Rajya Sabha for Gujarat from 2006 to 2012.

The 14th Gujarat Legislative Assembly election 2017 was held in two phases on 9 December and 14 December 2017. The election was held to elect all 182 members of the Gujarat Legislative Assembly. VVPAT-fitted EVMs were used for first time in entire Gujarat state at 50,128 polling stations.
Bharatiya Janata Party had emerged victorious by winning 99 seats (49.1% voteshare), 16 less than its 2012 tally of 115 and retained power in the state for the sixth consecutive term. Indian National Congress had emerged second largest part by winning 77 seats (43.9% voteshare). CM Vijay Rupani had retained his Rajkot West seat against Congress’ Indranil Rajyaguru who was richest candidate in the fray by over 21,000 votes.