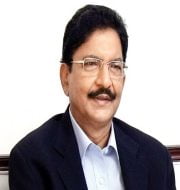 Governor of Maharashtra Chennamaneni Vidyasagar Rao, was sworn in as the acting Governor of Tamil Nadu.
He was administered oath of office by the Madras High Court’s Chief Justice Sanjay Kishan Kaul as per provisions of Article 159 of Constitution at the Raj Bhavan, Chennai.
President Pranab Mukherjee had given additional charge of Tamil Nadu to C Vidyasagar Rao as per Article 153 of Constitution as the tenure of K. Rosaiah ended on 31 August 2016.