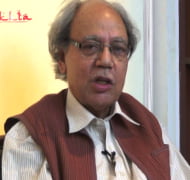 Eminent Urdu litterateur Shamim Hanfi was conferred with inaugural Jnangarima Manad Alankaran award of Bharatiya Jnanpith.
The Urdu scholar is known for his books on criticism like Ghazal Ka Naya Manzarnama, Jadidiyat ki Falsafiyani Asas and Infiradi Shaoor aur Ijtemai Zindagi.
Shamim Hanfi hails from Sultanpur in Uttar Pradesh and later had moved to Allahabad. Firaq Gorakhpuri, one of the most celebrated contemporary Urdu poets is his mentor
Earlier he had served as a faculty member in Aligarh Muslim University for a brief period of time. He also had served as the Dean of Humanities and Languages department at Jamia Millia Islamia till 2012.
Besides writing features and plays for radio and television, Shamim Hanfi also has been a freelance columnist for various Hindi and Urdu newspapers and periodicals.