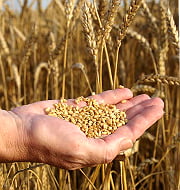 The Union Government has waived the import duty on wheat to zero from 10 per cent for an indefinite period.
This move aims to improve domestic availability in the wake of rising prices and concerns about the wheat crop in 2016-17.
The duty was waived because of uncertainty over the wheat output this year. Despite a rise in area sown, questions are raised over condition of the wheat crop, low fertiliser and pesticide use due to and fears of a warm winter.
The waiving of import duty will make wheat imports (especially from Australia and Ukrainian) considerably cheaper. This will fuel imports to over 6 million tonnes in 2016-17. This will be the highest wheat imports in the 10 years.
Background
The wheat production in the country will be around 93.50 million tonnes in 2016-17 as per the government estimates. However, many experts have pegged the figures around 90 million tonnes due to year-on-year droughts in 2014 and 2015. Moreover, Union Government’s own wheat stocks are at an all-time low due to less procurement.