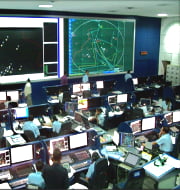 Union Government has given its approval for implementation of Integrated Air Command & Control System (IACCS) project of Indian Air force (IAF) with allocation of 8,000-crore rupees.
Decision in this regard was taken by Cabinet Committee on Security (CCS) chaired by Prime Minister Narendra Modi on the proposal forwarded by the Defence Acquisition Council (DAC).
Earlier in November 2014, DAC had given its nod for addition of 4 more nodes IAF’s IACCS.