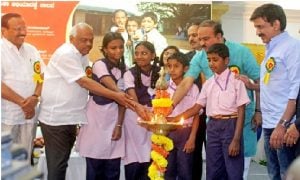 The Union Ministry of Health and Family Welfare has launched Measles Rubella (MR) vaccination campaign in the country at Bengaluru, Karnataka.
It is largest ever in any campaign against these two diseases will start from five States/UTs viz. Karnataka, Tamil Nadu, Puducherry, Goa and Lakshadweep covering nearly 3.6 crore target children.

Measles is a deadly disease and one of the important causes of death in children. It is highly contagious and spreads through coughing and sneezing of an infected person. It can make a child vulnerable to life threatening complications such as diarrhoea, pneumonia and brain infection. Globally, in 2015, measles killed an estimated 1, 34,200 children, mostly under-five years. In India, it killed an estimated 49,200 children.

Rubella is generally a mild infection, but has serious consequences if infection occurs in pregnant women, causing CRS, which is a cause of public health concern. CRS is characterized by congenital anomalies in the foetus and newborns affecting the eyes (cataract, glaucoma), ears (hearing loss), brain (mental retardation, microcephaly) and heart defects, causing a huge socio-economic burden on the families in particular and society in general. In 2010, an estimated 1,03,000 children were born with CRS globally, of which around 47,000 children (46%) were in South-East Asia Region.