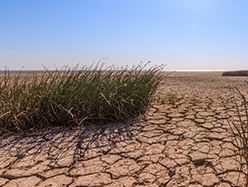 The United Nations Convention to Combat Desertification (UNCCD) launched a drought toolbox. The toolbox uses a total of 15 to 30 different parameters to assess drought risk and vulnerability of a geographical region. This is expected to ease the process for global governments to declare a drought.

The toolbox provides stakeholders with easy access tools, case studies and other resources to support the design of their respective National Drought Policy with the aim to boost the resilience of people and ecosystems to drought.

It provides “information that helps define priorities and develop actions that prevent drought from escalating into a disaster and mitigate its impacts.

These are tailored to the needs of the individual stakeholders.

It is difficult to define or provide a universally accepted definition of drought due to its different characteristics and impacts across different areas, ranging from rainfall patterns to human responses.

The Ministry of Agriculture is the nodal ministry for monitoring and managing drought conditions. In India droughts are classified:

Meteorological drought is classified based on rainfall deficiency w.r.t. long term average. A rainfall of 25% or less is normal, 26-50% is moderate and more than 50% is severe.

Agricultural drought is it is defined as a period of four consecutive weeks of severe meteorological drought with a rainfall deficiency of more than 50 % of the long-term average or with a weekly rainfall of 5 cm or less from mid-May to mid-October (the Kharif season) when 80% of India’s total crop is planted or six such consecutive weeks during the rest of the year.