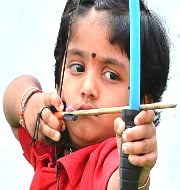 Two-year-old girl Cherukuli D0lly Shivani from Vijaywada, Andhra Pradesh has created new record in Archery and has entered her name into the India Book of Records.
She became the youngest Indian to score 200 points over five and seven-metre distances. At a show, she shot 36 arrows each from five metres and seven metres to score 388 points in the presence of senior sports personalities from Sports Authority of India (SAI) and India Book of Records officials.
After achieving this stunning feat, Shivani was presented with a trophy, medal and a certificate from the chief editor India Book of Records Biswaroop Roy Choudary.
Shivani is the kid sister of late Indian coach and international archer Cherukuri Lenin who had died in a road accident soon after 2010 Delhi Commonwealth Games. At a young age she is undergoing training at the Volga Archery Institute run by her father Cherukuri Satyanarayana.