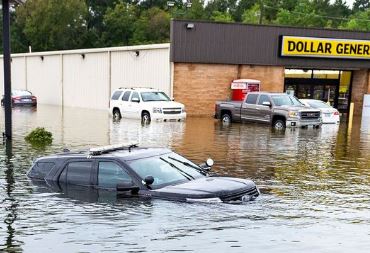 Heavy rains from Tropical Depression Imelda deluged parts of Texas and Louisiana of the US. The Imelda storm system brought the risk of severe weather disruptions and prompted tornado warnings Thursday morning in the areas hit hardest by the flooding.

Tropical Storm Imelda was formed out of an upper-level low that developed in the Gulf of Mexico and moved westward. There was little development until the system was near the Texas coastline. Later it rapidly developed into a tropical storm before moving ashore shortly afterwards. It made landfall as a weak tropical storm on September 17.

The upper-level low also known as a cold-core cyclone is a cyclone aloft which has an associated cold pool of air residing at high altitude within the Earth’s troposphere, without a frontal structure.

It is a low-pressure system which strengthens with height in accordance with the thermal wind relationship. If a weak surface circulation forms in response to such a feature at subtropical latitudes of the eastern North Pacific or North Indian oceans, it is called a subtropical cyclone.