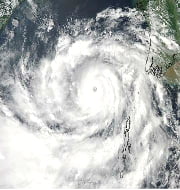 The tropical cyclonic storm Vardah over southeast Bay of Bengal is expected to hit Andhra Pradesh coast between Nellore and Kakinada. It is the third cyclonic storm of the season after Cyclone Kyant and Nada, that were formed during the Northeast Monsoon season.

It was created as depression (low pressure) over Andaman Sea and later slightly intensified further as cyclonic storm. The reason for the intensification can be attributed to warm sea surface temperatures of Bay of Bengal and longer sea travel. Since then, the tropical cyclonic storm Vardah has moved north-northwestwards with a speed of 10 kmph about 990 km southeast of Visakhapatnam and 250 km west-northwest of Port Blair.

The system is very likely to intensify further into a severe cyclonic storm. However, there is possibility of slight weakening of the system before landfall. It may result into moderate rainfall at many places with isolated heavy falls over coastal Andhra Pradesh. Squally winds speed reaching 35-45 kmph gusting to 55 kmph would prevail over Andaman and Nicobar Islands & adjoining sea areas for some time. Fishermen have been advised not to venture into sea along and off Andaman Islands and off Andhra Pradesh coast and adjoining sea areas.