The Pulses Conclave 2020 to be held in Lonavala, Maharashtra 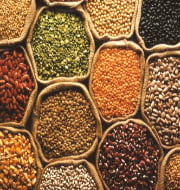 The India Pulses and Grain Association will host the Conclave. Around 1500 stakeholders from India and other countries are expected to participate in the conference. It includes Australia, USA, Myanmar, Canada, Uganda, Ethiopia, Tanzania, Malawi, Mozambique, etc. The conference aims at increasing exports, processing efficiencies, protein extraction, value addition and post-harvest management.

With India moving towards nutritious food production from self-sufficient food production, area under pulses production has been increased. Today, around 20% of area of agriculture contributes to pulses. MP, Maharashtra, Rajasthan, UP and Karnataka are the leading pulses producing states in India.

The conference will help in achieving India’s goal of doubling farmer income by 2022.

Pulses are significant in the country as they contribute to good consumer health as they are rich in proteins.